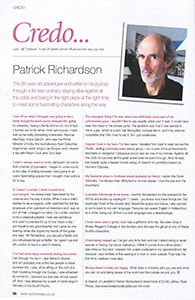 The 68-year-old adventurer and writer on his journey through a life less ordinary, staying alive against all the odds, and being at the right place at the right time to meet some fascinating characters along the way.

I SET OFF ON WHAT I THOUGHT WAS GOING TO BE A FAIRLY STRAIGHTFORWARD COURSE THROUGH LIFE, going to university, having a family and so on, but in fact it turned out to be often very dramatic. I have met some really interesting characters; Norman McCaig; Indira Gandhi, who was the Prime Minister of India; the revolutionary Rudi Dutschke; Argentinian writer Jorge Luis Borges; and I shared a flat with Robin Cook.

I DIDN’T ALWAYS WANT TO WRITE, although I do come from a family of journalists. I began to come round to the idea of writing because I was going to so many fascinating places that I thought I had a lot to say.

IF I WASN’T A WRITER I THINK I WOULD LIKE TO BE A COSMOLOGIST. I’ve always been fascinated by The universe and the way it works. When I was a child I wanted to be a surgeon, until I watched the first live broadcast of an operation on television and I was so put off that I changed my mind. For a while I wanted to be a classical guitarist. I was very ambitious and used to practise for up to four hours a day. I got myself a very good teacher, but I gave up one evening when she ripped my hands off the guitar and said, ‘Mr Richardson, you are just a fiddler and you will always be just a fiddler.’ So I gave up and left London to live in a cave in Greece.

I’VE HAD SOME HAIRY MOMENTS DURING MY TRAVELS. I fell through the ice in Lake Baikal in Siberia and am probably one of the few people to have survived it. Later, while sitting on the roof of a train travelling through the Congolese jungle, I was whacked by a branch. I blacked out and was almost swept off. And I was attacked by a pack of rabid dogs in Vanuatu in the South Pacific.

THE STRANGIEST THING I’VE EVER EATEN WAS DEINITELY SOME PART OF AN UNFORTUNATE GOAT. I wouldn’t like to say exactly which part it was. It could have been the head or the private parts. The problem was that it was served me in a ger, which is a tent that Mongolian nomads live in, and they were so hospitable that I felt I had to eat it. So I just swallowed.

CAPATAIN COOK IS MY HERO. For two years I travelled from east to west across the Pacific, visiting practically every island group. I’m in awe of his achievements and feats of navigation. Odysseus would also be one of my heroes. Against all the odds he survived all the great adventures he went through. And he was, like myself, a very flawed human being. In Search of Landfall is based on Homer’s Odyssey.

MY FAVOURITE PLACE IN SCOTLAND WOULD PROBABLY BE HARRIS. I adore the Outer Hebrides. I’ve always been attracted to remote places. I love the sea and the mountains.

I CONSIDER EDINBURGH TO BE HOME. I went to Amsterdam for the weekend in the 1970s and ended up staying for 11 years — you know how these things are. But eventually I tired of the crowds and missed the space and nature of Scotland. I also wanted to come back to my own language. Everyone can speak English in Holland but, as a writer, being cut off from my own language was a big disadvantage.

I’VE NEVER SEEN A GHOST, but I had a girlfriend who did. We were living in Cheat the Beggar’s Cottage in the Borders and she saw the ghost of one of Walter Scott’s characters.

I HATE BEING COOPED UP. I’ve got very itchy feet and can’t stand being in small spaces. I think it comes from a time when I was three or four and I crawled into a dark cupboard in my grandmother’s flat because I was terrified of the cawing of a rook or crow outside. That was the first time I realised I was alive.

MONEY DOESN’T MAKE YOU HAPPY. What does is knowing who you are and what you can do and being aware of the world and the people around you.