An afternoon with Jorge Luis Borges 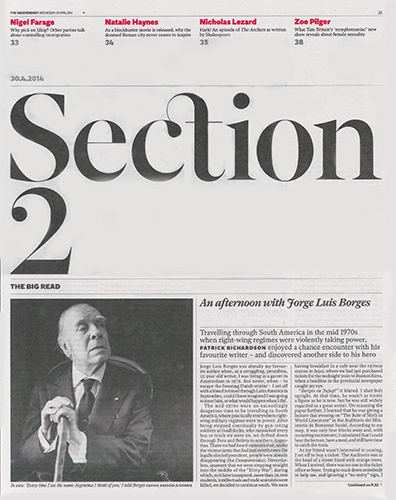 Travelling through South America in the mid 1970s when right-wing regimes were violently taking power, PATRICK RICHARDSON enjoyed a chance encounter with his favourite writer — and discovered another side to his hero.

Jorge Luis Borges was already my favourite writer when, as a struggling, penniless, 25 year-old-writer, I was living in a garret in Amsterdam in 1976. But never, when — to escape the freezing Dutch winter — I set off with a friend to travel through Latin America in September, could I have imagined that I was going to meet him, or what would happen when I did . . .

The mid-1970s were a very dangerous time to be travelling in South America, where practically everywhere right-wing military regimes were in power. After being stopped continually by gun-toting soldiers at roadblocks, who ransacked every bus or truck we were on, we drifted down through Peru and Bolivia to northern Argentina. There we had heard rumours that, under the vicious junta that had just overthrown the legally elected president people were already disappearing (the Desaparecidos). Nevertheless, unaware that we were stepping straight into the middle of the “Dirty War”, during which, so it later transpired, over 30,000 students, intellectuals and trade unionists were killed, we decided to continue south. We were having breakfast in a café near the railway station in Jujuy, where we had just purchased tickets for the midnight train to Buenos Aires, when a headline in the provincial newspaper caught my eye.

“BORGES EN JUJUY!” it blared. I shot bolt upright. At that time, he wasn’t as iconic a figure as he is now, but he was still widely regarded as a great writer. On scanning the paper further, I learned that he was giving a lecture that evening on “The Role of Myth in World Literature” in the Auditorio del Ministerio de Bienestar Social. According to my map, it was only four blocks away and, with mounting excitement, I calculated that I could hear the lecture, have a meal, and still have time to catch the train.

As my friend wasn’t interested in coming, I set off to buy a ticket. The Auditorio was at the head of a street lined with orange trees. When I arrived, there was no one in the ticket office or foyer. Trying to track down somebody to help me, and ignoring a “NO ENTRY” sign, I opened the lecture theatre door. Inside, it was dark, although at the foot of a steeply banked auditorium two technicians were helping a blind, senescent-looking man with a white stick up to a floodlit stage. A thrill coursed through me; I would have recognised those pallid features anywhere – it was Borges himself, doing a trial run for the lecture. 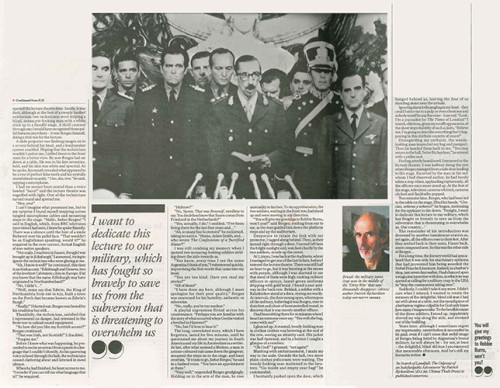 A slide projector was flashing images on to a screen behind his head, and a loudspeaker system crackled. Hoping that the technicians wouldn’t notice me, I sidled down to the front seats for a better view. By now Borges had sat down at a table. He was in his late seventies, bald, and his skin was white and spectral. As he spoke, his mouth revealed what appeared to be a row of perfect false teeth and his eyeballs stared ahead vacantly. “Uno, dos, tres,” he said, tapping a microphone.

I had no sooner been seated than a voice bawled “luces!” and the lecture theatre was engulfed with light. One of the technicians turned round and spotted me.

I can’t imagine what possessed me, but to my surprise I found myself stepping across tangled microphone cables and mounting steps to the stage. “Hello, Señor Borges!” I said in English, which, from BBC television interviews I had seen, I knew he spoke fluently. There was a silence until the hint of a smile flickered over his pallor. “That wouldn’t be an Englishman speaking, would it?” he enquired in the over-correct, formal English of non-native speakers.

“Not really. I was born in Sussex, though I was brought up in Edinburgh,” I answered, trying to ignore the technicians who were glaring at me.

“Ah, I know it well!” he continued, this time in an Irish accent. “Edinburgh and Geneva, two of the loveliest Calvinistic cities in Europe. Did you know that the name Edinburgh may have originated in Northumberland?”

“Well, some say that Edwin, the King of Northumbria from 616 to 632, built a town on the Forth that became known as Edwin’s Burgh.”

“Really!” I blurted out; Borges was famed for his erudition but still …

Thankfully, the technicians, satisfied that I represented no danger, had retreated to the front row to unload sound equipment.

“So how did you like my Scottish accent?” Borges continued.

“That was Irish, not Scottish!” I chuckled.

Before I knew what was happening, he proceeded to recite an extract from a poem in a language that I couldn’t identify. As his quavering voice echoed through the hall, the technicians ceased clattering about and listened in awed silence.

When he had finished, he leaned across to me. “I wonder if you can tell me what language that is?” he enquired.

“No, Saxon. That was Beowulf, needless to say. You doubtless know that Saxon comes from Friesland in the Netherlands?”

“Yes, actually, I do,” I nodded. “I’ve been living there for the last four years and …”

“Ah, so many fine Scotsmen!” he exclaimed, taking no notice. ‘Hume, Adam Smith, and … who wrote The Confessions of a Justified Sinner?’

I was still combing my memory when I spotted two menacing-looking soldiers striding down the aisle towards us.

“You know, every time I see the name Argentina I think of you,” I volunteered quickly, improvising the first words that came into my head.

“You are too kind. Have you read my stories?”

“I have done my best, although I must apologise for their poor quality.” Borges was renowned for his humility, authentic or otherwise.

A playful expression flitted across his countenance. “Perhaps you are familiar with the story of what occurred when Goethe visited a brothel in Hanover?”

The long, convoluted story, which I have forgotten, lasted for five minutes, until he questioned me about my journey in South America and my life in Amsterdam as a writer. At last, after what seemed a lifetime, a man in a stone-coloured suit came down the gangway, mounted the steps onto the stage, and leaned over him. “It’s time to go, Señor Borges,” he said in a hushed voice. “You have an appointment at three.”

“Very well,” responded Borges grudgingly. Holding on to the arm of the man, he rose unsteadily to his feet. To my apprehension, the two soldiers, waiting in the front row, had stood up and were moving in my direction.

“You will give my greetings to Robbie Burns, won’t you?” said Borges, smiling from ear to ear, as the man guided him down the platform steps and up the auditorium.

Desperate to retain the link with my protector, I tagged along behind. Then, as they turned right through a door, I turned left into the bright sunlight and, watched charily by the two soldiers, strode up the street.

At 7.30 p.m., I was back at the Auditorio, where I managed to get one of the last tickets, before I entered the lecture theatre. There was still half an hour to go, but it was bursting at the seams with people, although I was alarmed to see that most of them were high-ranking military officers in spruce, laurel-green uniforms dripping with gold braid. I found a seat mid-way in the back row. Behind, a soldier with a Kalashnikov stood at a door, eyeing me warily. At intervals, the door swung open, whereupon all the military, believing that it was Borges, rose to their feet and a host of faces swivelled round, to discover that it was merely another officer.

I had been sitting there for ten minutes when I heard an ominous voice say: “You with the bag, come with me!”

I glanced up. A stunted, weedy-looking man in civilian clothes was hovering at the end of the row, waving an identity card. His jacket was half-fastened, and in a holster I caught a glimpse of a revolver.

Blushing with embarrassment, I made my way to the aisle. Outside the hall, two more plain-clothes policemen were waiting. The weedy-looking man motioned to the lavatory. “Go inside and empty your bag!” he commanded.

I hesitantly pushed open the door, which banged behind us, leaving the four of us standing alone near the urinals.

Ignoring alarm bells jangling in my head – they could batter me to a pulp or even shoot me and nobody would be any the wiser – I saw red.  “Look, I’m a journalist for The Times of London!” I roared, oblivious, given my scruffy appearance, of the sheer improbability of such a claim. “Believe me, I’m going to describe everything that’s happening in this shithole country of yours!”

Disregarding my outburst, the weedy-looking man inspected my bag and passport. Then he handed them back to me. “You may return to the hall, Señor Richardson,” he uttered with a polite nod.

Feeling utterly humiliated, I returned to the lecture theatre. I was halfway along the row when Borges emerged from a side door leading to the stage. Escorted by the man in the suit whom I had observed earlier, he had barely taken a step when, applauding rapturously, all the officers once more stood up. At the foot of the stage, television cameras whirred, cameras clicked and flashlights popped.

Two minutes later, Borges, who had been led to the table on the stage, lifted his hands. “Gracias, señoras y señores!” he began, motioning for the applause to die down. “Tonight, I want to dedicate this lecture to our military, which has fought so bravely to save us from the subversion that is threatening to overwhelm us. Our country …”

The remainder of his introduction was drowned by another tumultuous ovation as, yet again, all the officers rose to their feet. After they settled back in their seats, I leaned back, more composed now. So this was the other side of Borges …

For a long time, the literary world had speculated that it was only his reactionary opinions that had prevented him being awarded the Nobel Prize for Literature. Indeed, in a barber’s shop, just seven days earlier, I had chanced upon a magazine interview with him, in which he was quoted as calling for a military coup in the USA to “stop the communists taking over”.

Suddenly, I couldn’t take it any more. I didn’t care what I missed; I wanted to retain the memory of the delightful, blind old man I had sat alone with at a table, not the mouthpiece of a barbarous regime culpable for God only knew how many desaparecidos. To the bewilderment of the three soldiers, I stood up, impulsively shoved my way along the aisle, and stormed out of the building.

Years later, although I sometimes regret my impetuosity, nevertheless it succeeded in its goal; even if I can’t erase that awful image of Borges being feted by Argentina’s brutal military, he will always be — for me, at least — the delightful, blind old man I encountered that memorable afternoon. And he’s still my favourite writer.